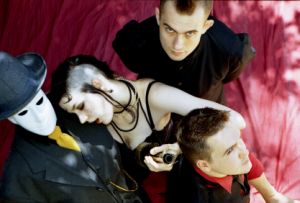 Once upon a time, during a Christian Death concert in the south of France, two little boys decided that it was high time for them to start making something wild and frantic out of their ideas. As they were surrounded with moaning creatures in black lace and huge boots they clinked their plastic glasses and shouted: “let’s be a band!” Meanwhile, at the same concert a poor lonesome bassist was dreaming of a band from outer space.

The band really started in 2000 when they found THE voice… There was only one thing left to do: working! So they did, and explored their own universe: a Deathrock Avant-garde cabaret, a label that serves them to describe their infl uences and the way that their actors want to go. Their infl uences comes from cabaret songs to deathrock, including electronic contemporary music. Their aim is to fi nd their correct proportioning for these infl uences mix in a homogenic music, surrounded in an atmosphere of Avant-garde, silent films and absurd play.

The Kabarettists have decided not to release a CD for the moment for they consider not having completely reached what they are aiming to. However, they also decided to release for free in january 2005 the drafts of what will become their first album in mp3 format. Indeed, most of the tracks will be re-recorded in order to give, added with new tracks, their first real, pure and perfect album. The Katzenjammer Kabarett opened 2 times for the Dresden Dolls in France and also played in Germany for a Ghost Dance party.