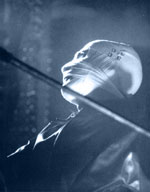 In 1985, the Absolute Controlled Clinical Maniacs, a project with members of different Belgian bands, DIRK IVENS / MARC VERHAEGHEN / ERIC VAN WONTERGHEM / SANDY NIJS were invited to do a tour in Norway. When they returned, they changed their name to The Klinik. Nys soon left the band to form "Hybryds", followed in 1987 by van Wonterghem to form "Insekt" , leaving The Klinik as the "classic" duo of Dirk Ivens and Marc Verhaeghen.Dirk was a member of The Klinik until 1991. When they decided to split up, they already built themselves a very good live reputation with their unique sound and visual gigs and became, besides Front 242 and The Neon Judgement, one of the biggest names in the Belgian electonic/industrial scene. Even today they are still an influence for many young bands.

The Klinik soon made a name for themselves with their cold and harsh EBM sound and their live shows, where both Ivens and Verhaeghen performed with their heads wrapped in gauze, wearing long black leather coats. Ivens' hissing vocals and minimalist lyrics were complemented by Verhaeghen's synthesizer skills and distorted trombone playing (the latter giving the music a slightly feverish sound). This however, did not last forever; after Time, an album neither member was fully pleased with, musical differences became too great, and they decided to go their separate ways.

Ivens concentrated on his own projects DIVE , SONAR, BLOK 57 and recently again with ABSOLUTE BODY CONTROL, and Verhaeghen continued as KLINIK; sometimes as a solo project, sometimes with various other members , making mostly instrumental dark ambient techno and has been involved in several projects including Noise Unit, D.Sign , X10 and Para.