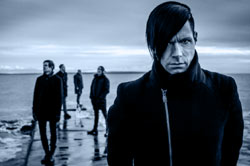 Sex Drugs and Technology.
The new flavour of 2000 was undoubtly the Norwegian electronic rock band, ZEROMANCER. They were rewarded best newcomer at the GAMA awards the same year and received unanimous acclaim for their debut album, “Clone your lover”. Stand out tracks: Clone your lover, Something for the pain, Opelwerk. Image: Five black silhouettes lined up on a vast dry lake-desert
Their follow up album, “Eurotrash” was another eyeopener. And was if possible even better welcomed by the press and by now the fast growing fan base. Their reputation as a very special live act with their intense presence and their possesive energy, grew fast and they soon headlined their own European tours.
Stand out tracks: Dr. Online, Need you like a drug, Send me an angel.
Image: The glossy dark look in a stark contrast to the white-out background.

Zeromancer then invaded the US. And got a stronghold with their third album ZZYZX (Zeyesix). The title inspired by a weird place out in the Californian desert named the last place on earth, they built a large fanbase in the alternative dark scene in America and toured the country coast to coast.
Then sealed it off with their biggest European tour to date and decided to leave the spotlight for a while.
Standout tracks: Famous last words, Stop the noise, Teenage recoil.
Image: Colourful but cold. Alex in front with a sleeveless white in front of the San Fransico skyline.

Since then Alex Møklebust, Noralf Ronthi and Kim Ljung has reunited their former band, Seigmen. Known as the biggest alternative rock act throughout the previous decade in Norway. The reunion was an enourmous success that will result in a double DVD and a live album this summer.
Zeromancer’s songwriter, Kim Ljung also released a double album under the name, Ljungblut in 2005 However this fall Zeromancer will return to grace.
And not the least return to Germany.
They are about to start recording their fourth album, “Sinners International”, which is due to release early 2007.