In case you belong to the type of people that believe that electronic music and sex appeal are two things that will never go together ... we promise you that Swedish boy-meets-girl duo Ashbury Heights will easily convince you of the contrary. 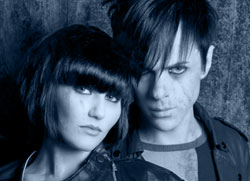 The two effectively mingle the cool erotica of early New Wave with the shrill attitude of Glam, the raw appeal of Electro Clash and a foundation of warm and seriously FAT analogue synths. Mr. and Mrs. Ashbury also know how to appeal to the eye and, with their positively sleazy androginous chic, offer a perfect projection screen for obsessive male and female fantasies. Rather fittingly, the music emanates the same kind of aura - a combination of youthful energy and the coolness of experience - that we have not heard since the early days of New Wave and Future Music. If the early Human League were to suck up the Thin White Duke´s Glam, the coolness of the Tubeway Army and cheap raunchiness of Electro Clash to produce music in the here and now of today ... they would sound like Ashbury Heights. This is music bound to heat up the dancefloor of any old club.

The success of their debut album certainly proved the two young Swedes right and had them rise from a total newcomer to one of the most successful Electro acts in 2007. “The Cheers for the Newlydeads” received praise from critics and the general public alike and on their shows at the Out of Line Festival Tour 2007, the band also managed to sway the audiences live. Returning home, singer, songwriter and band mastermind Anders was so enthused that he immediately started working on new material with his female vocalist at the time, Yasmine. The fruits of their labour were released in summer 2008 on the EP “Morningstar in a Black Car.” Anders says: “the songs showcase a lot of different sides to Ashbury Heights. We always try to evolve our sound with each new song we write.”

Anders is currently working hard on new material with new singer Kari Berg, who became part of Ashbury Heights in late 2008. The chemistry between the two young musicians seems to be more than good, as they are already nearing completion of their next album, which is most probably going to hit shops in the first half of 2009. Backed up by their strongest tunes ever, the young duo is looking confidently into the future... and it is seriously looking as though nothing will be able to stop these Swedes!