Blitzkid is one of the premiere horror rock bands of the new millennium. They began in Bluefield, WV in the winter of 1997. They have toured consistently all over the US and overseas. 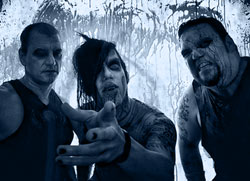 The band is headed up by Argyle Goolsby(bass/vokills) and TB Monstrosity(guitars/vokills). In the time they have been a band, they have garnered critical underground acclaim for their tireless work ethic, consistent, ever evolving album output and dedication to giving their audience the respect they deserve through providing great songs and energetic llive shows.

The band has a prodigious and Herculean following in the states as well as Europe, and have shared the stage, in some cases regularly, with such notable acts as Agent Orange, the Damned, Leftover Crack, the Misfits, the Rezurex, Bella Morte, Mad Sin, the Exploited, Ignite and the Casualties. Blitzkid have also been a part of many of the biggest festivals in Europe including Mera Luna, Rock My Ass, Endless Summer and even the predominantly metal/hardcore festival Summer Breeze, where they shared the stage with Dark Tranquility and Soulfy in the summer of 2007 in front of over 20,000 people.

They are booked by Weird World Entertainment in Europe, and managed overseas by D-Tour booking. They are booked exclusively by Thunderdome Touring in North America. The band has a label home based out of Koln, Germany in Fiend Force Records and remain one of the top selling acts on the label since they began their tenure there in 2004. The band has released material consistently since 1999, and in that time, have released six full length albums, two split vinyl EPs, and a live DVD. Their music has also appeared in many salient horror films, most notably "It Came From Trafalgar".

They have also appeared in such international publications as Terrorizer, Punk Rock Confidential, Metal Maniacs, Rue Morgue, Horrorhound, Virus, Drop Dead, Revolver, Zillo and Ox. Endorsements are also something that have not eluded the band as they have close working partnerships with Coffin Case, Schecter guitars, Ampeg, Hotpicks, and Monster Buckles. Since they have been together, the band has captured the imaginations of fans of underground music all over the world, sometimes even inspiring said fans to ink the band's now notorious Nosferatu "fledermaus logo" onto their flesh.

At Blitzkid shows, there is no separation between the band and the fans, and you can expect it to be a catharsis of emotion, intensity and raw melodicism. They are not here to sell you a snowglobe, a smirk, or a self imposted title of grandiosity, rather a mirror into your life. Their aim has and always will be, to create something meaningful for themselves and others, forsaking fame and fortune for songs that stand the test of time. LONG LIVE THE HORROR!!!!