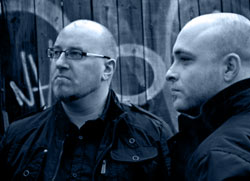 In fall 2003 the first album “Future Prophecies” was released and launched Destroid on a direct course into the top 10 of the DAC (german alternative charts). After the killer-debut “Future Prophecies” the guys around Daniel Myer (Haujobb, Architect, HMB) released their second longplayer in October 2007. “Loudspeaker” premiered to a wide audience on a highly successful joint European tour with Painbastard and [:SITD:], followed by shows worldwide in the USA, Russia, Australia and others, including shows on various festivals.

With “Loudspeaker” the band easily made its way back to the DAC, remaining there for not less than 8 weeks (peak position 3). Currently Destroid are working on their next effort, which, amongst others, will include guest vocals by Sven Friedrich (Zeraphine) and a VNV Nation Remix. The new material will celebrate its premiere on the Christmas Ball Festivals (with Front 242, Suicide Commando, Covenant and Welle:Erdball) in December 2009.