Eisbrecher: Sex, Girls and Rock’n’Roll – Get ready for the new ultimate Ice Age!!!

In 2002 an unexpected Ice Age chilly intoxicated the world of music. After having divided from Megaherz because of artistical differences, singer and mastermind Alexander „Alexx“ Wesselsky (lyrics/vocals) and sound-engineer, DJ and ex-member of Megaherz, Noel Pix alias Jochen Seibert (composition/keyboard, guitar, producer), founded the industrial dark-electro rockband Eisbrecher to aim for music far beyond all usual Metal clichees – modern electro Trip-Rock. Emotional, honest, forthright – no compromises. Based on electro programming, Alexx and Noel fulfil their musical vision of interesting songs: diverse, clothed in beats modern and danceable. The lyrics are all about us as human beings and in which direction we choose to develop. Eisbrecher take their listeners on a cold seductive journey through individual human relations in a darker getting world: it’s about ‘You’ and ‘Me’ combined as ‘We’ in ‘Here’ and ‘Now’. Which way do you wanna go? 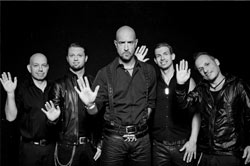 Their debut „Eisbrecher“ and the following album „Antikörper“ pull all the stops and slingshot Eisbrecher into all ears and hearts. Within two weeks “Antikörper” made it to top 85 of Media Control Charts. Songs like “Vergissmeinnicht” and “Leider” get the dancefloors crowded and touring afterwards navigates the band to success. Alex, Pix, Jürgen Plangger (2nd guitar), Olli Pohl (bass), Max Schauer (keyboard) and René Greil (drums) are celebrated frenetically in Moscow after playing in legendary Club „Tochka“: a real highlight.

Now it’s time for Wesselsky and Pix to grab for their stealy ice pick once again and to sculpt their third work „Sünde“ out of the abysms of their gloomy souls. Heavy industrial beats clash with skewed Electro, guitar sounds and rousing strophes in addition to Alexx’ distinctive and cynical voice. There’s no doubt that Eisbrecher are speeding through the water and definitly rough up the already tempestuous scene. Dark and sexy, ominous but appealing, sensuous and destructive - two meters tall Alexx is a man of controverses, polarising and ensnaring in equal measure.

„Kann denn Liebe Sünde sein“ blows the dust out of your stereo with vehement electrifying power. The ballad „Herzdieb“ produces fragile, melancholic atmosphere and Wesselskys voice convinces with deep desperation. „Zu Sterben“ caps it all off, takes the audience on a trip through morbid gelid worlds, thoughtfully and tangent because of vulnerable fragileness. Very auspicious material as the singer resumes: „2007 has been a very successful year for us but because there are still people not knowing us we aren’t allowed to retire now – so we have to carry on. This is why we backed out once again to the Pix-Studios (Freising) to create our dark erotic masterpiece „Sünde“. We reflected about our lives, snidely glanced at actual world affairs and now we’re drowning in work.”

Still Eisbrecher fight their way through the floods. “We never worked so hard before on an album. More pressure, more power, more emotion, more of everything… especially of life”, tells Mister Ice. “Studio work is like a rollercoaster… to ban feelings authentically on mediums for millions the way you would do it live, forces more than all of you. Full concentration, listening with all senses and self criticism without mercy. Never before so many ideas were thrown on the dump of rock history. Not until heart, brain, belly and balls move to a happy round dance, not until the Pix and the Alexx creatures unify in a loud ‘That’s it!’ a new song is born. With every album our perfectionism gets more fanatic. The rule is: if something doesn’t carry us away, how could we expect it to do with others? You’re not ready until you’re ready. We are talking about our third album: victory or victory, there is no other option in circus maximus of dark rock music! For us “Sünde” is the ultimate challenge, now we have to win the battle.”

It`s time to hoise the flags and raise the storm: In September Eisbrecher are going to blaze the trail without any compromises on german stages again. On board: 13 sinful Tracks: wild, wicked, seductive, dangerous, violent und full of brute force to let you know, Eisbrecher are back, better than ever!!! In Germany the album “Sünde” with its hits “Herzdieb”, “Kann denn Liebe Sünde sein” and “This is deutsch”, made it to top 18 Media Control Charts and top 1 Alterna Charts. Let`s see what happens when EISBRECHER enters the US …

Are you ready for that new ultimate Ice Age???