welcome to catastrophe. notorious south german grinches end of green return with their sixth meanie: „the sick‘s sense“. it‘s a monster. a mountain of black. or the tunnel at the end of the light – depends on which way you look at it. driven by loads of melancholy, anger and bitterness, end of green take their blackness to a whole new level. 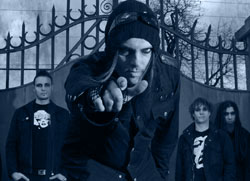 it‘s deeper, it‘s more vicious and it‘s even catchier than everything the five-piece has ever done before. end of green let goth, metal, alternative, rock‘n‘roll and sophisticated 80s influences become one unique wall of sound that is insuperable for those who don‘t dare darkness.

speaking of that: goth crooning michelle darkness, kirk kirker, lusiffer, rainier sicone di hampez and sad sir once again manage to sound like they‘ve just released their debut record. „the sick‘s sense“ is packed with charming abandon. almost snotty. end of green tell their dark tales of real life in a cynical way. the one life we all know about, the one we all struggle with – there‘s no innuendo here, but a baseball bat instead. a sucker punch. even when end of green conjure up their fragile vein.

„the sick‘s sense“ is a remarkably straight-forward way out of the trap goth bands dive into by the hundreds: repetition. just when you thought you knew what they‘re all about, end of green wreck your neck and whisper gently in your ear that they are way more than goth posterboys with an irresistible sense for really good tunes. they hit the german charts, they hit strange levels of appreciation – but it seems end of green weren‘t too impressed with these side effects. stubborn as they are, end of green still go by their mission statement: song first. they are not afraid of songwriting and they‘re definitely no strangers to catchiness.

on stage end of green break down the borders between artist and audience. with their thoroughly intense performance they transform an ordinary concert situation into a deep and impressive trip. once you witness that insanity – you‘re a fan for life. and this in turn is the fuel for the end of green motor. it‘s like a vicious circle you don‘t want to miss out on. with „the sick‘s sense“, end of green is shifting into sixth gear – always straight ahead but definitely off-highway.

„the sick‘s sense“ was produced by corni bartels at weltraum studios in munich, germany. usually a place for pop oriented type of records. but this seemingly strange alliance worked out perfectly. sounds like soulmates finding each other.

always remember: music that doesn‘t touch you is a waste of time.