The Journey started more than 20 years ago: Atari computers,Drummachines,4 Track Recorder, Recordplayer,Guitar and bass and a lot of musical ideas. 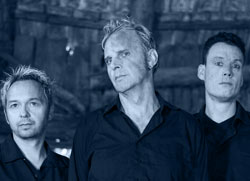 With his project "Escape with Romeo" the ideas of cologne based guitarist and singer Thomas Elbern became reality.

The first record was released in 1989 and from here things start moving : Their song "Somebody" hits the clubs and EWR became a full band, touring and playing in germany and creating a huge fanbase.

Now, 20 years, 9 records and a live DVD later, it's time for a summary : 14 songs have made it on the "History" compilation, all have their part in the musical universe of Escape with Romeo.


Escape with Romeo have played countless live shows and are well known especially in spain as a regular touring band. But also the US ,Russia (where they released 3 of their albums) and South america have discovered EWR.
There is a small, but devoted amount of DJ's worldwide, that put EWR on their regulary setlist.

Before Escape with Romeo will take an indefinitive hiatus, there will be some selected shows where they will play highlights of their 20 years of existence "The final escape" is a motto for the shows in 2010 and is a big chance for old fans to revitalize their memories and all those who want to dis or rediscover the band again.