The Tumor has been eradicated! He had long used up all his resources for unleashing electronic devastation on mankind and was therefore removed from the face of the Earth in one final, deafening operation. 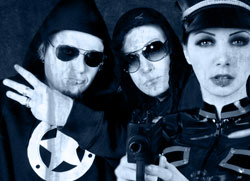 But just as mankind deemed itself to be safe from this madness and was beginning to see Chris Pohl as a mere protagonist of sophisticated dark Pop music, a new two-headed beast was silently rising from the smouldering ashes of the most party-compatible cancerous growth in history. Chris Pohl’s mad alter ego – the totally demented dark side of this smart Goth Pop dandy – took control of its master again and started forcing him to perform new antics in his sonic laboratory. Needing a partner in crime, Chris instantly fell upon his fellow Terminal-Choice-collaborator Gordon M. … a guy whom he had always known to be one beer short of a six-pack and who would, thus, serve as the perfect front figure for these new sonic diseases. A lot of days passed, days in which Chris was busy holding up his worldly façade of the dark lord during the daytime, only to lock himself up in his secret studio with the beast Gordon at night. Nights, in which his humble servants and his neighbours would only hear sinister laughter, weird screams and thudding beats. After a prolonged period of clandestine, nocturnal activities, the mad duo emerged with smoking lab coats and crazy grins on their faces: Miss Construction was born!