Hocico-front-shouter Erk Aicrag has created a new Rabia Sorda album that outshines his solo debut in all aspects. 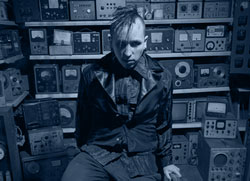 His Harsh-Electroclash-Cyberpunk-hybrid sounds more versatile and melodic but also more aggressive and powerful in 2009 than ever before. Sporting a massive production from mixing-desk-wizard John Fryer (Nine Inch Nails, Depeche Mode, HIM), Rabia Sorda prove once again that they are the most interesting and unique Hard-Electro-act out there with the energetic fusion of melody and aggression on “Noise Diary.”