Kirlian Camera is one of those special music projects that will have connoisseurs raving on about how good they are with glowing eyes, that manages to fuse sonic experiments, club-compatibility, anthemic pathos and a wholly unique aura into a one-of-a-kind experience and that has been able to span generations of fans. 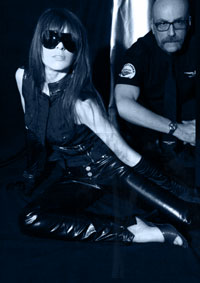 Founded in the Spring of 1980 by Angelo Bergamini, the band has been releasing albums with music that can be of exceptional beauty, ingrained with experimental fury and imprinted with a sparkling catchiness over the past three decades – sounds without bounds that all carry that unmistakable Kirlian Camera trait. Anthems like “Eclipse”, “Heldenplatz”, “K-Pax” or the more recent, mesmerizing epos “E.D.O. – Europa Drama Orbit” are mandatory spins at underground discos around the world and the band is fervently worshiped by its fans at live shows. Since 2000, the creative core of the band consists of Angelo Bergamini and the highly charismatic and strong-voiced singer and performer Elena Alice Fossi, who was also part of the project “Stalingrad” with Bergamini and who helmed “Sideratica”, the project that has now evolved into the highly successful all-girl indie-band “SPECTRA*paris.”

After the critically acclaimed mini album “Shadow Mission: HELD V” and the anthologies “Odyssey Europa” and “Not Of This World”, Kirlian Camera are currently working on their new single “Winged Child Sitting On A Bench Watching Obscure Clouds Getting Closer While People Seek For Shelter“, an intense appetizer for the upcoming, new album that, as Bergamini says “will capture the essence of Kirlian Camera like never before.” With a tour, big festival gigs and the probably best album they have ever recorded, Kirlian Camera are adding an impressive, new piece to the puzzle of their own legend in 2011.