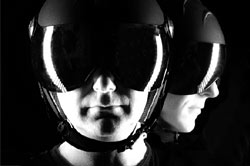 The Juggernauts saw the light of day late 2010 when BORG (The Klinik, ex-...) and Glenn both met at a concert of The Neon Judgement.

While BORG's creative outlet was only recently chopped-off, after having to abandon his former project, he told Glenn how eager and inpatient he was to strike back. Minds and idea's melted instantly!

A couple of days later the two teamed up at Glenn's home studio and only a few hours later their first song 'Phoenix' was already blasting from the studio speakers. The track was picked up almost immediately by one of Germany's leading labels Out Of Line, and was featured on their 'Awake The Machines 7' compilation album in July 2011.

Even before they released anything the band gained a loyal following during 2011-2012 and was invited to play some of Europe’s most renowned festivals like Easter Fest (Ghent,B), M’era Luna (Hildesheim, D), Industrial Booom (Budapest, HU), Nordstern (Hamburg, D), Familien Treffen, (Dessau, D). and the Wroclaw Industrial Festival (Wroclaw, PL).

Meanwhile, while their first EP Phoenix will released on Out Of Line March 1st. 2013, work on a full album is in progress ...