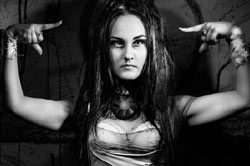 Vic Anselmo is a Latvian Gothic/Alternative singer and songwriter (At the moment lives in Essen, Germany).


A stunning voice and wide musical horizon let her find her own special ways in composing music. Her songs sound like a soundtrack to imaginary movie. They are very sensual and amaze with dynamic contrasts and sound variety. All that comes together with an impressive onstage image.

Vic Anselmo is the first Latvian alternative female singer that got to be known outside the Baltic States.
Her debut album «Trapped in a Dream» was released in Europe in October 2008 and got a great response from music media: Newcomer of The Month in Orkus 10.2008, 2nd place in Zillo’s sound check, Legacy12/15, Rockoon 5/6, Sonic Seducer Sound check 7th place, Gothic 9.5/10, West Zeit 5/5 and more…
Vic Anselmo supported an European tour of German electronic avantgarde duo Deine Lakaien. Vic Anselmo opened all 24 shows of Indicator tour and got a recognition and awesome response of big audience in Germany, Austria, Switzerland and Luxembourg. Except tour with Deine Lakaien she had two European club tours with her band and performed at such big festivals as WGT 2009 (D),Castle Party 2009 (PL), Waregem Gothic Festival 2010 (BE), Elf Fantasy Fair 2010 (NL), and Dark Mills 2010 in London. Vic also performed on stage with Das Ich as a guest artist at WGT 2011 and Amphi Festival 2011.

Vic Anselmo offers two different formats of her live performances: The performance with her band- when the concert turns into a colourfull show with theatrical elements and unique onstage outfits.

The acoustic performance – intimate and sensual, when Vic perfoms solo with a piano.

Vic Anselmo is Victoria’s stage name. Once her friends started to nickname her because of her addiction to Pantera (American metal band). Vic comes from Victoria; Anselmo is the surname of Pantera’s vocalist Phil Anselmo.

Vic Anselmo appeared in a book of the British music journalist Mick Mercer. He has also reviewed her song “Before I Could Breathe” from the upcoming album:

“VIC ANSELMO do beautiful achey pop with ‘Before I Could Breathe’ and I trudged in a sullen fashion to my master copy to see if I’d included her in my new book, fearing the worse, but I had! (Damn, but I’m good!) It’s very commercial and conventional, and just sweeps you away, gloriously.”