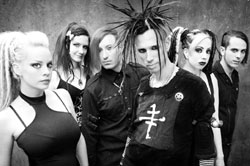 Hardly any band has touched the European scene as THE CRÜXSHADOWS did within the last years.

Emotionally touched... in the truest se nse of the word cause barely another band has reached to animate their fans this way to dance. THE CRÜXSHADOWS achieve to create a personal and emotional connection between them and their audience which is of course part of their show.

No doubt: their live-shows are breathtaking and still unrivalled. THE CRÜXSHADOWS have performed since June 2001 more than 300 concerts in more than 30 countries. This is a great example which shows us that success can be realised indeed with honesty, talent and persistence aside the industrialised music market.

Live, love, be, believe - THE CRÜXSHADOWS