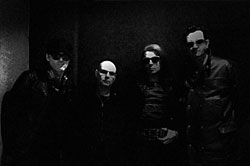 Established in England in 1988, NOSFERATU have grown to become one of the most commercially successful Second Wave Gothic Rock Bands Worldwide..

They have sold well over 100,000 albums and singles world-wide plus hundreds of thousands of songs on compilation albums since their first commercial release in 1989.

NOSFERATU have the credibility of being one of the few elite UK Gothic Rock bands to enjoy chart success both In the UK & Germany.

They have a vast Back Catalogue of independent releases: