Artist info: One I Cinema 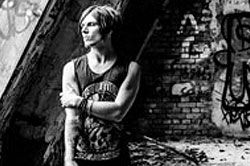 ONE I CINEMA (OIC) is a German alternative rock band, hailing from Osnabrueck, Lower-Saxony. The band was founded in 2013 by its only official member Marco Meyer, who solely remains responsible for the band's musical direction as its main producer, singer, songwriter and multi-instrumentalist.

After recording his debut album, Meyer assembled a live band to perform with him. The group, besides Meyer handling the vocals and main guitars, consists of three live members- Hannes Kelch(git), Ilja John Lappin(bass) & Phillip Steven Albright(drums)-making the whole a four-piece rock band on stage.

ONE I CINEMA's music combines a wide range of rock music styles – be it the heavy beatdowns of the modern Metal-age riffings, represented in a melodic Led Zeppelin-drive-by-modus, while some passionate vocal yearnings strive to escape the latter day society's angst of the personal hell, which alltogether settles in the elder Dredg-like rhythmics, of course without forgetting the Blues to do the rest of the talking...
Thematically, it's all about human emotions and impressions like selfishness, feelings of guilt, isolation, rejection, self-disgust up to suicidal thoughts, which all pulsate a dark atmosphere.

Whatever it is (and what you may call it), in a time of plastic music industry, pop-bubble-Hollywood-cinderellas and a trend of „pushing some mo' Dubstep into that sound“, ONE I CINEMA is about to prey on the people, showing that the real shit is still happening out there and welcoming back the sense of ROCK and ROLL.