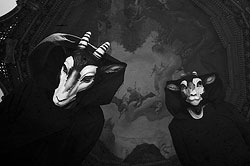 Inspired by the director and film score composer John Carpenter, THE DEVIL AND THE UNIVERSE spent the summer of 2014 working on their new album HAUNTED SUMMER.

Austrian musicians Ashley Dayour (Whispers In The Shadow etc.) and David Pfister (Neigungsgruppe Sex, Gewalt & Gute Laune etc.) started their musical-transcendental composition and transformation project THE DEVIL AND THE UNIVERSE in March of 2012. Their goal was to use their musical creativity to allow the legitimacy of magic and religious mechanisms form musical rules whereby the authenticity of these systems play no role.

The first result of this syncretic musical endeavor was the debut EP :EVOKING ETERNITY:, published by the Berlin-based label AUFNAHME + WIEDERGABE in 2013. Aufnahme + Wiedergabe went on to publish their first long-play album :IMPRINT DAATH: (2013) along with three further EPs (featuring remixes by MATER SUSPIRIA VISION and IN DEATH IT ENDS)

Haunted Summer
In the summer of 1816, poet and author Lord Byron, sent out an invitation for friends to enjoy the summer air at his villa on Lake Geneva. The invited party partially consisted of the novelist couple Percy und Mary Shelley, Mary Shelley’s half-sister Claire Clairmont and the author and physician John W. Polidori.

The host and the guests combated boredom at the Villa “Diodati” by consuming drugs, and partaking in sex and séance sessions. The decadent time-filling got increasingly radical and culminated in a frenzy of physical and moral transgressions. More than a few of the guests and the household staff left the Villa psychologically rattled after that summer holiday. Mary Shelley, deeply affected by the experience, went on to write her world-famous book ‚Frankenstein’.

This historical summer inspired the Austrian music-project THE DEVIL & THE UNIVERSE to create their second album HAUNTED SUMMER. The album was created with a new third member joining the project, Stefan Elsbacher (Black Manna), in a small chapel in a forest in Styria. Four weeks were spent to evoke the ghost of that ‚Haunted Summer of 1816’. Tools of the occult such as automatic writing (as demonstrated during Tarot card reading) and necromancy were used to help form the musical ambition. And naturally, just like with Mary Shelley or Lord Byron, here too, legitimacy and faith play no roles. It’s more about the effect and a libertine attitude.