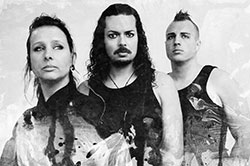 Dutch number one dark electro band XMH was founded in 2006 by singer Benjamin Samson, later to be joined by Pieter Sperling on keyboards and Isa Garcia on vocals/keyboards. The same year XMH released their debut album 'LIFE' in 2006, which stayed in the Dutch Underground Charts for more than 6 months! Immediately XMH played at Holland’s major venues building up a strong fanbase. In several magazine polls XMH ended up in the top 3 of Best Newcomer Bands.

In Summer 2007 XMH released their second album ‘TIME TO PLAY’ which got very good response. The cd reached nr. 2 and the song 'Rape Your God V.2’ went to nr.1 in the Dutch Underground Charts. In short time XMH have worked themselves up to become one of hottest live acts from Holland. XMH have already toured in Germany, England, Spain, Holland, France and Belgium as support for Covenant, Combichrist, Blutengel, Project Pitchfork, The Birthday Massacre, The Crüxshadows and many others.The energetic live shows have been received very well by audience and media. XMH already played at festivals like Wave Gotik Treffen, Summer Darkness, Gothic Festival, Infest, Terra Gotha, Antronic. XMH has a take no prisoners, in-your-face attitude with main-focus singer Benjamin Samson, who takes control of the stage and is viciously shouting like a rabid dog on steroids.In 2009 XMH released a called the Led Manville Remixes which went to nr. 2 in the DUC. In that very same year readers of Sonic Seducer Magazine voted XMH to the 3rd position of the Battle Of The Bands Competition. In 2010 XMH got signed to Danse Macabre Records and released the cd ‘STATE OF MIND’ which went to nr. 1 in the Vampire Freaks EBM Charts and the song ‘Komasaufen’ went to nr. 3 in the Deutsche Alternative Charts. The cd got very good reviews and XMH was featured in many major music magazines. In 2013 XMH got signed to Alfa Matrix. The 4th XMH album entitled ‘IN YOUR FACE’ was released in April 2014. On the new XMH album the band is slightly leaving the aggrotech path and moving into new directions. "IN YOUR FACE" adds diversity and grandeur to the successful repertoire of XMH. While remaining faithful to their characteristic trademark sound, they also show they can shine on more downtempo trance and future-pop influenced songs like "Great And Unfortunate Things" or the poignant and almost orchestral and menacing "Falling Technology".This said, XMH's growing songwriting maturity will surely not deceive the harsh elektro crowds since their sonic mission remains unchanged: inflicting angry hours to defenseless dancefloors! And they are armed with a bunch of potential new club hits full of strong ripping basslines and hammering beats: check songs like "The Blind", "Snakes", "Product" or yet "The Business" which all attest that XMH have overrun the barricades to grab you by the throat!