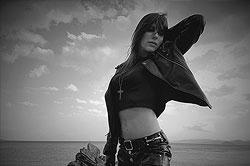 Kirlian Camera is one of those special music projects that will have connoisseurs raving on about how good they are with glowing eyes, that manages to fuse sonic experiments, club-compatibility, anthemic pathos and a wholly unique aura into a one-of-a-kind experience and that has been able to span generations of fans. Founded in Spring 1980 by Angelo Bergamini, the band has been releasing albums with music that can be of exceptional beauty, ingrained with experimental fury and imprinted with a sparkling catchiness over the past three decades – sounds without bounds that all carry that unmistakable Kirlian Camera trait. Anthems like "Nightglory", “Eclipse”, “Heldenplatz”, “K-Pax” and "Odyssey Europa" are mandatory spins at underground discos around the world and the band is fervently worshiped by its fans at live shows. Since 2000, the creative core of the band consists of Angelo Bergamini and the italo-american highly charismatic, beautiful and strong-voiced singer, composer and performer Elena Alice Fossi, who is also part of the project “Stalingrad Valkyrie” along with Bergamini and helmed “Sideratica”, the project that has now evolved into the highly successful indie-band “SPECTRA*paris, as well as header of acclaimed acoustic-orientated combo Alice Neve Fox.” After the critically acclaimed mini album “Shadow Mission: HELD V” and the successful anthologies “Odyssey Europa” and “Not Of This World”, Kirlian Camera released new album "NIGHTGLORY" that, as Bergamini says “captures the essence of Kirlian Camera as never before.” With a tour in Germany, Belgium, Holland, Italy, Greece, Denmark, etc. ("Nightglory Tour 2011-2012"), big festival gigs and such a great album, Kirlian Camera added an impressive and hugely important piece to the puzzle of their own legend. "IMMORTAL", 6-track mini-album related to the last album, has been released May 2012.

May 2013,an important date in band's history: Kirlian Camera release the intriguing and surprising new album "BLACK SUMMER CHOIRS", produced with class and talent by Elena Alice Fossi herself with a remarkable help from legendary top producer/mixer John Fryer (Nine Inch Nails, Depeche Mode, Radiohead, This Mortal Coil, Ulver, The Wire, Cocteau Twins, Paradise Lost, etc.) at mixing desk. An album that highlights an incredible new change of orientation for this uncompromising band and their inspired rebel singer: a mournful and cloudy atmosphere is ready to take listeners to a no-way-out world... Dark ballads and hypnotic visions from a very disquieting future of humanity.... Not to forget 4 beautiful previously unreleased songs added to track-list in a classy limited edition of 1000 certified copies, a box containing great items for the fans. An obscure, touching and at the same time beautiful omen from a luminous and lonely star.

2014: some big manoeuvres, this year… the band being at work on a brand new single along with Covenant! Temporary title: "Sky Collapse" and Elena Alice goes on the Magdeburg stage on the occasion of the 2-day charity event “Benefiz for Kids Festival” along with Covenant singer Eskil Simonsson... Meantime, a luxurious american edition of "Uno" comes out September.

2015: early days of the year "Edges – 21st Century Versions" (feat. Kirlian Camera /John Fryer, Starion, ShamBok, etc.) has been released on vinyl+digital by legendary label Italian Records (via Kompakt)! "The Best of Kirlian Camera (Radio Music A)", a collection album on CD+digital also including some previously unreleased songs/versions comes out in summer, while SPECTRA*paris is at work on a brand new album… Both Spectra and Kirlian left Out Of Line Records after 7 years. A new future adventure is getting closer: the band performed twice at prestigious WGT-Wave Gotik Treffen Leipzig, at Volkspalast (Leipzig) May 22nd and at Kohlrabizirkus (Leipozig, May 24th) getting an incredible success, in front of more than 10.000 enthusiast and delirious-like audience, giving several encores and performing the new single, written by Elena and Angelo for the Division K-Pax debut single+album!!! After 2 months, the band headlines the CSD Gay Festival in Magdeburg and the WGT success is doubled: 3 encores in front of a crazy audience that, after the 3rd encore, when the band has already reached the backstage... want KC back on stage for a 4th one, so... Elena and friends jump on stage once again and the square explodes!!! The people sing loud along with Elena the umpteenth encore in a joyful night that won't be forgotten for sure!!!

2016: This year is just the most intense the band has seen since the very beginning, as just weeks over weeks has been spent into studios! Kirlian Camera made a few gigs, all absolutely successful as far as appreciation and audience attendance are both concerned. Elena Alice has been duetting on stage with Covenant twice again on the occasion of the double headlining at the Kasematten Festival in Germany, then collaboration with other musicians gave shape to two songs/singles written together with John Fryer (Depeche Mode, Nine Inch Nails, Ulver, Cocteau Twins, etc. legendary producer) for his post-This Mortal Coil project Black Needle Noise, plus a radio/dance single written with John Rox, summertime released, which will take place as an alternative track on Elena's brand new work of her SPECTRA*paris side-project. By the way, the SPECTRA*paris announced album premiere live at the Gay Pride in Magdeburg/Germany has been cancelled by local promoters due to some possible public order problems, after the recent massacres made by religious fundamentalists in Europe. Meantime, Angelo Bergamini and John Fryer have just taken part in the recordings/mixings of the new SPECTRA*paris material in Italy and Norway. Last part of the year has been spent in studio once again, as well as some few stages: an ultra-limited 2-day exclusive show in Nuremberg (2nd day the band holds a very particular world premiere of the new album, performing new material in front of 100 people who had to sign a special non-recording agreement once buying entrance ticket. Ticket that has been gone immediately soldout online, of course!), then headlining the Electrika Festival in Dakar (Senegal), first electronic band ever to play Western Africa. Last December days to be spent to prepare the Sylvester show in Dresden (Germany), whereas Kirlian Camera have recorded a milestone in the musical career, that is their 1st official live recording ever, to be issued on Digitals/CD/DVD/B-Ray in the new year via Pro/Media Dependent Records; the day before, KC's EAF will make a very special recording behind closed doors in the presence of a few friends only, performing different tracklist which will be professionally recorded as well. In fact, the German/American label is the new home of the band, after their bumpy split with Norton North and friendly farewell to Out Of Line Records! Elena Alice Fossi has in fact signed an exclusive agreement to ProMedia in July (Dependent is an office of such an entity, getting bigger and bigger throughout the last period, rare case in the music industry by far!), when label boss went to Tuscany to meet the terrible duo ElenAlice+Angelo also coming to a final agreement with the two, so.... the new years opens up with a brand new single (“Star Bubbles”) and a new album “RetroMachine Betty” by project SPECTRA*paris, now totally renewed and widely going to embrace cyberpop electronica with an help from Elena's big love for vintage electronics and futuretro sound shaping! In the meantime, Angelo is going to make his debut as a photographer (“I'm just an unexperienced hobbyst” he likes to say, while he's going to press som elimited copies of a beautiful postcard-collection album starring... guess who?! Right Elena Alice, his favorite model since the very beginning, not to forget a new year calendar and the request for a personal retrospective in a prestigious gallery!). So, coming to main act Kirlian Camera, at last... they eventually announced the forthcoming release of their brand new minialbum “Sky Collapse” feat. Covenant as well as new album “Hologram Moon”, feat. Covenant as well and, even here, some massive use of electronics is going to get a leading role! 2017 is going to attack the electronic “Welt” with such new milestones wich will characterise the future of Elena Alice and her inseparable friend since newborn millenium made its first cry back in January 2000!!! (And, by the way... well, there's a further unexpected news to be shared and ... no, ok... let's wait for them to tell us more........!!!!!!!!)