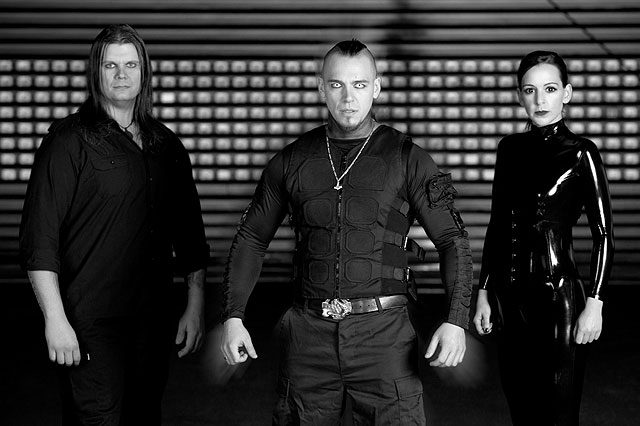 The first album „Lichtsucher“ (2003) was incredible! DAC Dj Bullet Nr.1 in the DUC Charts, Zillo Sampler and concerts in whole Europe. Without a Label!

In „Gottwerk“ there was 2006 the second album. It was an electronic firework at it's best. This time with the Label Final Dusk. This album was very successful.

After a tour with Agonoize Centhron Mastermind Elmar Schmidt produced the most danceble Centhron album DOMINATOR!
In spring 2011 the Longplayer, with the new bassist Markus Vogler, was released still at Scanner/Dark Dimensions!

Crowned by a successful tour through Europe and Russia! A videoclip of the song „666“ was seen over 580.000 times on YouTube. Even the song “Cunt“ reaches this views easyly.

In spring 2013 „Asgard“ saw the darkness of the night.

The new album with hard basslines, catchy hooklines and nothern mythology smashes down on the world like Thor's hammer at the skull of the midgardsnake!

A live Video to the titletrack “Asgard” was recorded in Moskau and released on YouTube.

2014 came the “Biest” over the world. It is aggressive in it's whole songs and artwork and brought with “Pornoqueen” a new extreme and catchy track to YouTube. Hard tracks, hard lyrics, fast beats, brutal sound!

Centhron were on tour through whole Mexico and the U.S., met there a lot of new fans and friends.

Now Centhron has reached a new level and is now “Elite” of the dark scene. WGT, E-Tropolis, Amphi, M'era Luna, Orus Fest, they played all these festivals. The song “Dreckstück” was released as a Live performance at the Sonic Seducer Compilation of M'era Luna 2016.

In the current album “Allvater” Centhron hails the old gods with an harsh electronic firework!

Be sure, the dancefloors of this world will burn, raise your fist!