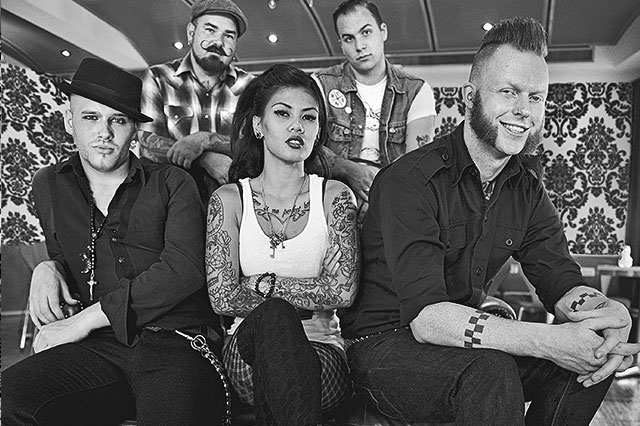 It’s true what they say. You can’t keep a good band down.

For the past 8 years The Creepshow have been smashing the whole world in the face with their brutaltastic mélange of punk, country, psychobilly and good old fashioned rock n’ roll. They’ve toured the world, sold a metric shit-ton of records and blown the faces off a ga-zillion fans…But the road to punkrock infamy hasn’t all been paved with rainbows, unicorns and gum drops. Over the years, the band has been fraught with innumerable hardships along the way. From robberies and wrecks to line-up changes and countless personal obstacles, this band has lived through it all. And you know what? Instead of crying in their beers and whining like assholes, they got more strongerer, more awesomer, more determinated and a whole hell of a lot angrier.

Which brings us to the title… “Life After Death” is the fourth full-length from Canada’s reigning heavyweight champions of macabre, horror-soaked radness. Self-produced with the engineering magic of longtime friend Steve Rizun at Drive Studios (The Flatliners, Dillinger Four, Ill Scarlett, Protest The Hero etc), “Life After Death” is a sonic ear-gasm of debauched delights. Eleven venom-drenched bangers run the gamut of themes ranging from bloody revenge (duh) to unconventional love to the joys of cocktails to defiance in the face of insurmountable adversity and back again. This is the redefined, renewed, resurrected Creepshow at their very finest.

Praise from the press gallery:

“The album is nothing but good, rollicking, blood-soaked fun. Highly recommended.!” – All Music

“Most importantly, however, it finds them branching into new lyrical territory, resulting in a formidable pastiche of twang, balladry, fire and maturity beyond the genre's restricting horror-influenced slap-and-shuffle confines. “ – Exclaim

“The Creepshow have pushed the boundaries, which has worked in their favour and will keep fans listening to their music for years to come- just maybe not when the lights are off.” – The Examiner

“At this pointing in the game The Creepshow can do no wrong. They might not have the most original premise, but their growing thematic awareness and tight melodies make for one hell of a psychobilly romp with little to no equal. A must have for creeps and punks alike.” -PunkSite