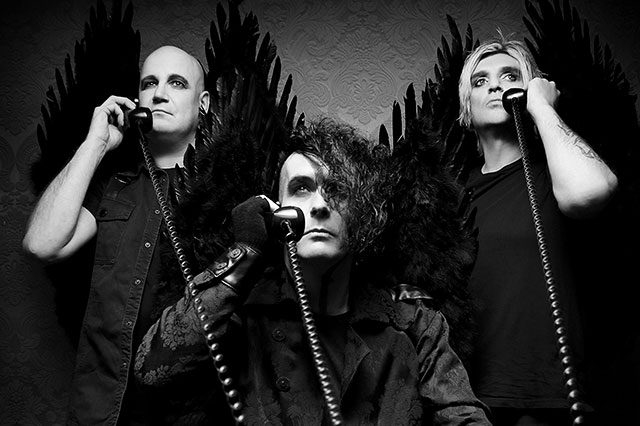 After their wild ride through the continuum, PROJECT PITCHFORK dedicate themselves to quantum mechanics – and casually discover time travel on the way! As was the case in 2010 with the surprising Dark Electro smasher "Continuum Ride", PROJECT PITCHFORK again started the engines in utter secrecy to continue their unparalleled history of success with "Quantum Mechanics".

While the opulent retrospective "First Anthology" was more than a huge treat already, the Dark Electro titans take the festivities surrounding their 20th anniversary one step further and present an album that is nothing less than a quantum leap vehemently stirring the space-time continuum. As if the extensive work for the recently released compilation caused a chain reaction of hitherto unknown proportions, PROJECT PITCHFORK enter an era of unparalleled creativity and deliver a massive Dark Electro meltdown as versatile as seldom before – an unbeatable time travel through past, present and future of dark electronics that will instantaneously rise to the top of PROJECT PITCHFORK’s aureate album cosmos.

Barely one year after "Continuum Ride", PROJECT PITCHFORK prove that a band can reinvent itself even after two decades and that artistic evolution is not a thing restricted to newcomers. Quite the opposite: Under the electronic shell, the partly mechanically sterile, partly fantastically ambivalent album shows both the impressive muscles of long-running experience and a knack for big emotions. With the perfect balance between the endless infinity of space and the warmth of humanity, it will reconcile followers of the early PROJECT PITCHFORK cult albums with their contemporary sound universe more than even before.

Radical, edgy and aggressive as in "Radical Business", melancholic and dark as in the title track or iconic and masterly as in "Freeze in Silence" that should be passed as the new basic law of Dark Electro: "Quantum Mechanics" stays true to its title and proves to be a darkly electronic transit into a new era. Superior, visionary and deeply fascinating – PROJECT PITCHFORK get better every year!