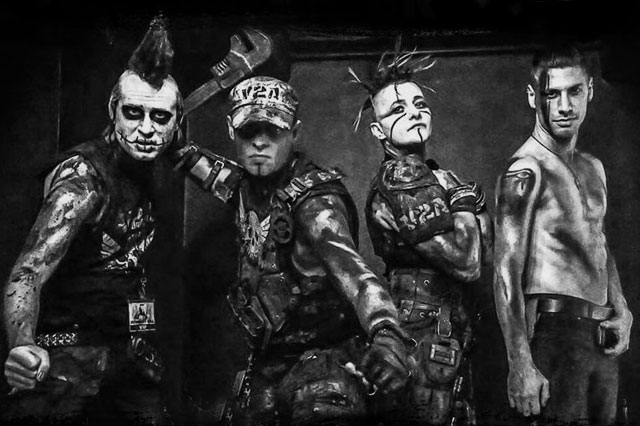 As a fierce live act, V2A toured with scene legends COMBICHRIST as their European Main Support on their “EVOLUTION Tour”, as well as NACHTMAHR on their 10-date marathon Tour in Germany during their “Unbeugsam Tour”, not to mention played Wave-Gothik-Treffen festival’s premiere Agra Hall to thousands of fans. Not only in European demand, V2A has also headlined the iconic Mad Max-themed Wasteland Weekend Festival in the Californian Mojave Desert (USA) for four years in a row, including being featured at its 10th anniversary edition!

Their fame reaches beyond just regular scene borders, having performed at a vast number of comic conventions and sci-fi festivals, working with stars like David Hasselhoff and William Shatner. Additionally, V2A are officially composing the music for the Mad Max 2: The Road Warrior 40th anniversary documentary, Maxed Out. With interviews and live recording sessions with radio stations (including the famed BBC UK) further spreading their sound, V2A’s success seems unstoppable.

After releasing their seminal debut (EBM) in 2001, five further albums since followed, with the latest being 2018’s GRAVITY KILLER. All five of these reached the top 10 in the German DAC Charts for the maximum amount of weeks possible!^