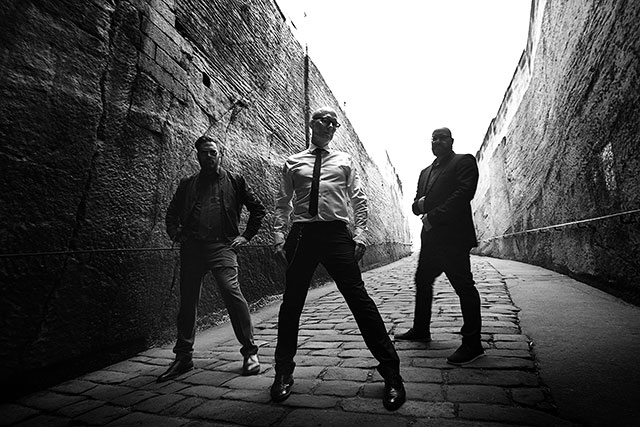 Picture: Frank Machalowski
Covenant. It’s a name that implies extraordinary commitment, a certain grandiosity, and a bond stronger than blood. As a name, Covenant—with its biblical overtones—was perhaps a bit ambitious for an upstart band of teenagers from southern Sweden armed with rudimentary electronics, but it ended up being extraordinarily fitting. Whether or not life subsequently imitated art or art subsequently imitated life is debatable, either way the band’s moniker ended up perfectly summing up the vision, grandeur, and brotherhood that is the band itself.

Beginning, as most bands do, as teenagers fiddling with instruments in their parents’ basement, the earliest incarnations of the band featured, astoundingly, six members. Over time the line-up trimmed down to a cast of three: vocalist and songwriter Eskil Simonsson, keyboardist and lyricist Joakim Montelius, and keyboardist Clas Nachmanson. Their first song written as the contemporary incarnation of Covenant was “Replicant”, a track which, Simonsson notes, was such a quantum leap forward for the band that he was certain it would be the last one he’d ever write. Little did he know, a deal with Swedish label Memento Materia and an entire album’s worth of material would soon follow. That album would be Covenant’s first release, Dreams of a Cryotank, which would spawn an important early club hit for the band, “Theremin”, a track which can still be heard on dancefloors today.

By this point Covenant was already making a name for themselves through their live shows. Their connection with early audiences would garner influential recruits. One of these would be Stefan Herwig, then manager of German record label Off Beat. By early 1995 Covenant would have its first record deal outside of their native Sweden. Their second Album Sequencer would launch them onto the international forefront. It would result in the band embarking on their first European tour—opening for Steril and Haujobb—and their first foray into North America, while “Stalker” and “Figurehead” were conquering the clubs Their third effort “Europa”, as well as the successors “United States Of Mind” and “Northern Light”, established Covenant as a major act at the top of the electronic dance music. Hits like “Der Leiermann”, Call The Ships To Port” and “Bullet” became their trademarks. With a spate of headlining performances at major festivals in Europe Covenant also redefined their already impressive reputation for stellar live shows.

Shortly after the release of their sixth studio Album Skyshaper, Nachmanson amicably parted ways with the band and was replaced by Haujobb’s Daniel Myer. At first brought in exclusively for live shows, Myer was, in short order, asked to join the band permanently. Naturally, extensive touring followed, this time covering Europe, Russia, North America, South America, Australia, and finally, the Far East.

As the decade closes, Covenant embarks on yet a new direction as they place the final finishing touches on their seventh studio album, Modern Ruin. At one atmospheric and anthemic, deeply disconnected and yet deeply personal, Modern Ruin is seemingly an apt title for the maelstrom of beats and emotion it contains. Modern Ruin also marks another first for the band—the debut of now permanent member Daniel Myer’s songwriting collaborations. Where it will take the band is unclear, but one thing is certain—it will be no smaller than the world.