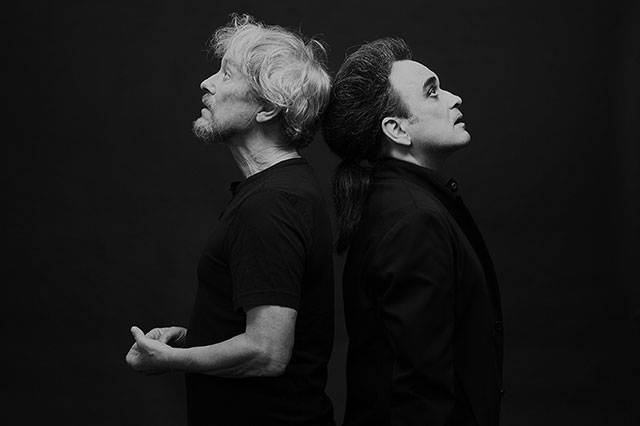 "Older, wiser, but still we are these fighters" – one line from Deine Lakaien's song "Along Our Road" puts the message of their new album in a nutshell. One might equally say: farewell legends – welcome to reality. For, after a voyage of over twenty years' duration, Deine Lakaien are ready to ditch old ballast and every last cliché and present the most exciting album of their entire career.

Few bands have so polarised opinion over the last two and a half decades as this duo, singer Alexander Veljanov and keyboard player Ernst Horn: it's always been a straight case of love or hate. Yet only a few notes of the opener suffice to recognise that past judgements – good or bad – no longer hold true. Tired categorizations are a thing of the past for this band. Having laid aside their masks and stepped out from the shadow of their history, the two dedicated performers are centred more clearly than ever in their own selves – which is an open invitation to listeners from across the board to step into their world.

"Indicator" doesn't simply rehash tried and tested formulas. It heralds a whole new era. Anyone who's always appreciated Deine Lakaien will find on this album a fine range of what the duo has always done well. Both musicians have, after all, crammed tons of experience into their tour luggage. When they kipped it all out on the studio floor, there were surprises in store. True, they maintain their original focus on electronic instruments but the stylistic diversity and natural playfulness they derive from that is amazing. The long pause to gather its wits and completely revise priorities evidently did the duo good.

One aspect is even more important than their return to electronic sounds. Deine Lakaien now works to create intimacy with its listeners. They have courage enough now for poetic simplicity of a kind they rarely attempted before. Their songs may still be highly emotional but divested of any touch of pathos they sound refreshingly carefree and light. "The heavy metaphors that dominated earlier albums have ceded to a poetic and political immediacy never before present in our work to this extent", Veljanov confirms. Deine Lakaien thus succeed in juxtaposing critical, cutting-edge treatments of controversial political themes and quite everyday love songs. When they sing about immigration, European unity, war, and responsibility for the future, the spotlight is on their environment, not on a sense of their own importance. They've no need to sham to express what makes them mad.

In terms both of content and music, "Indicator" is a multifaceted, intense album that embraces the world's diversity, dreams and hopes yet also relentlessly faces up to reality. The title "Indicator" must be understood also in that light. Deine Lakaien consciously chose a no-nonsense motto, not only for the listeners' sake but also for their own, and as a signpost on their new path. Because they're older, wiser, but still these old fighters...