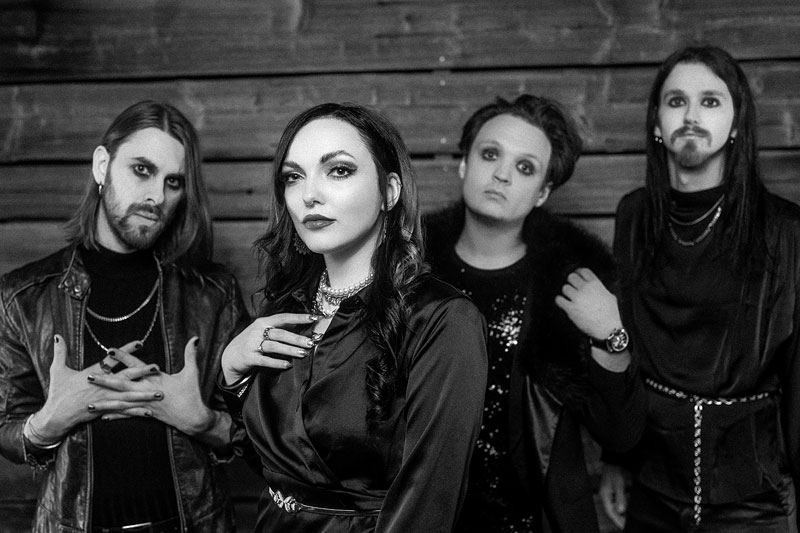 It’s often the seemingly insignificant things that suddenly and unexpectedly trigger the most surprising developments.

In the case of Scarlet Dorn it was a little video track featuring the Siberian-born vocalist and composer which sparked the interest of Hamburg producers Chris Harms (Lord Of The Lost) and Benjamin Lawrenz in autumn 2014. The clip had been shot following a not entirely serious invitation by Lord Of The Lost to their fans to compose the most beautiful love letter to the band on Facebook. One of the entries was said video clip featuring the previously unknown Scarlet Dorn, who performed a song entitled ‘I Love The Way You Inspire Me’, accompanying herself on the piano. Harms and his studio colleague Lawrenz immediately knew that this was budding talent in urgent need of cultivation. Only three years have passed, and the experienced producers’ decision has proved to be dead right. In almost no time, the talented musician has become the namesake and figurehead of four-piece newcomer band Scarlet Dorn, which includes Lord Of The Lost pianist Gared Dirge, guitarist Bengt Jaeschke and drummer Henrik Petschull. This line-up succeeded in captivating its audience night after night during their tour with Lord Of The Lost in spring 2017 and is now set to release its debut single ‘Hold On To Me’ at the end of February 2018, in time for the group’s tour supporting Letzte Instanz. Their subsequent tour alongside Joachim Witt will be supported by their second single release ‘Heavy Beauty’, and the arrival of Scarlet Dorn’s first full-length album Lack Of Light on Oblivion/SPV has been announced for August 2018.

Of course there are lots of reasons for such a rapid development, the most important being Scarlet Dorn’s warm, clear voice which sounds tailor-made for her songs at the interface of atmospheric, dark pop, rock and electro influences. At the same time, the 25-year-old impresses with an artistic maturity that’s rare in other musicians her age. But then, there’s also a reason for that maturity: Scarlet started music school at the age of six and received classical vocal training as well as piano and guitar lessons. Having moved from Siberia to Germany in 2001, she took part several times in Jugend musiziert, Germany’s most prestigious music competition for young people, and has performed in a number of opera and musical productions.

All this and much more is now about to explode on her band’s debut album. Together with Harms and Lawrenz, Scarlet has composed a multitude of atmospherically diverse songs, a full dozen of which feature on Lack Of Light. All those wanting to get an idea of the basic biometric data of her music should really listen to the album’s opening track ‘Heavy Beauty’ with its wide stylistic range, or to ‘Hold On To Me’, which presents Scarlet Dorn from their pop-oriented side. The duet with Chris Harms on ‘Love The Way You Say My Name’, which is based on the above-mentioned initial video clip, sees Scarlet reveal her penchant for ballads, while ‘Snow Black’ also features rough edges: the song challenges its listeners not only with its unconventional sound and unusual arrangement, but also with its bizarre interpretation of the popular Snow White story. Talking of which: Scarlet Dorn’s treatment of the original Cinderella theme on the same-named track isn’t exactly what you’d call squeamish either, their version having the story’s protagonist embark on a veritable vendetta.

These very different songs and atmospheres suit Scarlet Dorn perfectly, because her attractive face, big dark eyes and sweet-natured gaze cannot belie the fact that this charismatic vocalist has a strong and highly individualistic personality. In other words, Lack Of Light is the beginning of an extremely promising career which we are all about to witness!